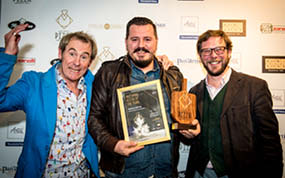 Rexha’s Signature Pizza Di Bosco – which means ‘From the Woods’ – was praised by the judges for its seasonality, high quality and perfectly balanced flavours.

“We usually cook by the season in the restaurant and we’re in mushroom season, so for Di Bosco we used wild mushrooms, truffle, stracciatella and 24-month aged parma ham,” says Rexha (pictured centre). “All of the toppings are top quality and chosen in the right season and weather, so that’s the inspiration behind it. And I just really love truffle.

The Technical Award went to Glenn Evans of Las Iguanas, capping a remarkable year for him, as he also won 2017’s National Burger Awards in February. The Pizza Chef of the Year – who was selected based on the combined scores in the Technical and Signature Round – was Alessio Alcini of Fountain & Ink, London.

Other sponsors included Artis, who provided every finalist with special pizza knives for their restaurants, and Menuserve who provided desserts. Beer at the evening event was provided by Birra Moretti.

here to add your own text

This site uses cookies. By continuing to browse the site, you are agreeing to our use of cookies.

We may request cookies to be set on your device. We use cookies to let us know when you visit our websites, how you interact with us, to enrich your user experience, and to customize your relationship with our website.

Click on the different category headings to find out more. You can also change some of your preferences. Note that blocking some types of cookies may impact your experience on our websites and the services we are able to offer.

These cookies are strictly necessary to provide you with services available through our website and to use some of its features.

Because these cookies are strictly necessary to deliver the website, you cannot refuse them without impacting how our site functions. You can block or delete them by changing your browser settings and force blocking all cookies on this website.

These cookies collect information that is used either in aggregate form to help us understand how our website is being used or how effective our marketing campaigns are, or to help us customize our website and application for you in order to enhance your experience.

If you do not want that we track your visist to our site you can disable tracking in your browser here:

We also use different external services like Google Webfonts, Google Maps and external Video providers. Since these providers may collect personal data like your IP address we allow you to block them here. Please be aware that this might heavily reduce the functionality and appearance of our site. Changes will take effect once you reload the page.